Pirongia (Pool Steps) Playground – Can you help us?

The only thing we have left from our old pool are the very expensive access steps that the Ministry gave us to comply with the access for all policy. These stainless steel steps cost a significant amount but unfortunately can not be used with our new pool. 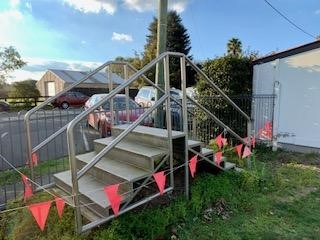 We have tried to sell them to other schools and on TradeMe with no luck. Our students love playing on them and we like to encourage imaginative play, but as they are lopsided we have to have them tucked away. We asked the Pirongia Syndicate to come up with some ideas and designs to see what we could create using these as the base of a new play area, to be built around the old bars under our precious rhododendrons.

We are very pleased to announce the winner – Tayla G with her design of a boat. We had a few boat-like structures designed for us but Tayla’s design had the greatest details and depth of potential. We plan to create a ship in a cruise/pirate style, that has a viewing deck/walk the plank on one side and an evacuation slide on the other, with a mast/flagpole at the top. Mrs Bennetts is going to work with a team of Pirongia artists to create the scenes on the sides of the steps. We hope that the Dad’s Army will build the area that it will end up in.

What we need is some clever parent/grandparent(s) who can help us with some stainless steel welding and connections, to attach the viewing/walk the plank and evacuation slide. Do you know of anyone or do you have the skills to help us out?

Congratulations also go to Leah A, who has gained a highly commended place with her design of a space rocket. 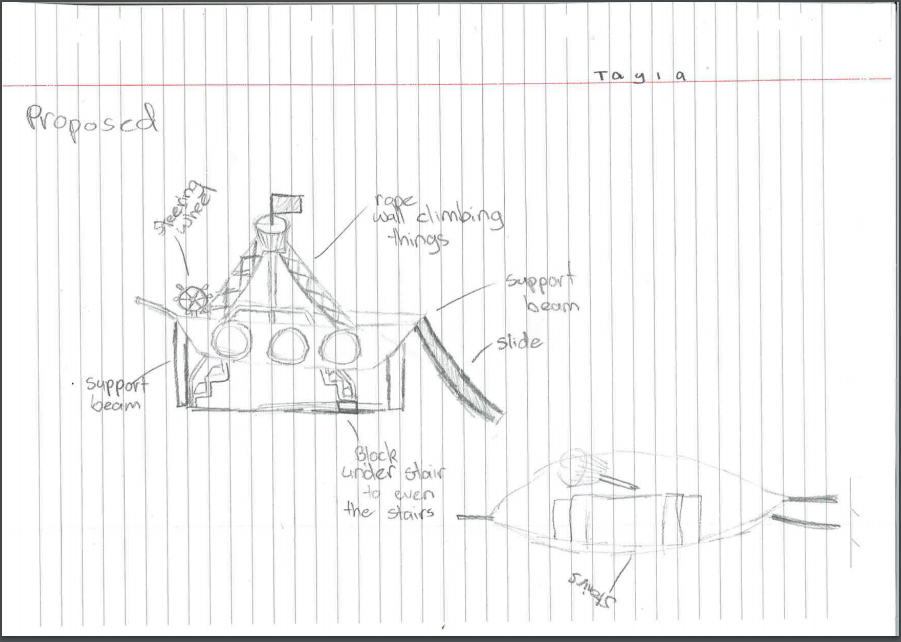 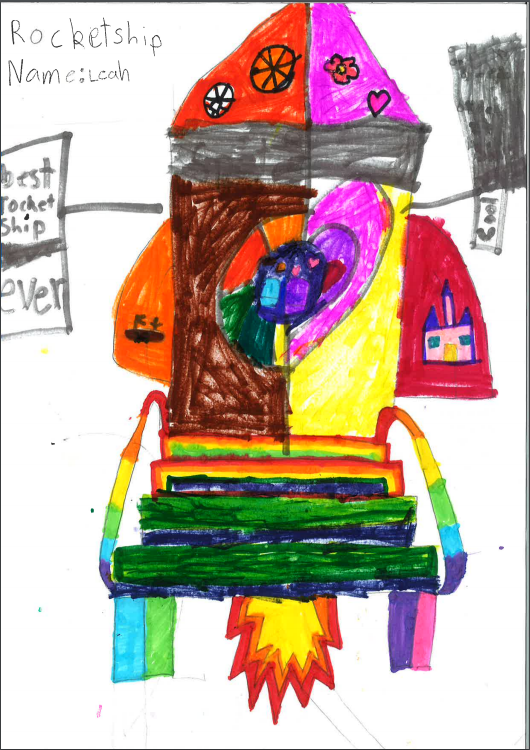 Tuesday was a day filled with excitement for the children in the Taupiri Syndicate. We set off early on three busses with our packed lunches, feet ready for walking and big smiles. Our aim for the day at the Hamilton Zoo was to find out more about how animals communicate.  What a perfect place to do this! There are animals galore, from a darling baby Rhino called Aria to five VERY tall giraffes just waiting for us to marvel at them. The zoo keeper Ken delivered a fascinating education session to all of the groups about the different methods of communication different animals use and the children then explored the extensive range of exhibits in the education centre.

The TMCS children did a wonderful job of walking many thousands of steps around the zoo, learning about the incredible creatures they saw and keeping those huge smiles on their faces all day. We would like to extend our thanks to all of our parent helpers who gave up their time to join us on our Zoo adventure, your help was much appreciated! 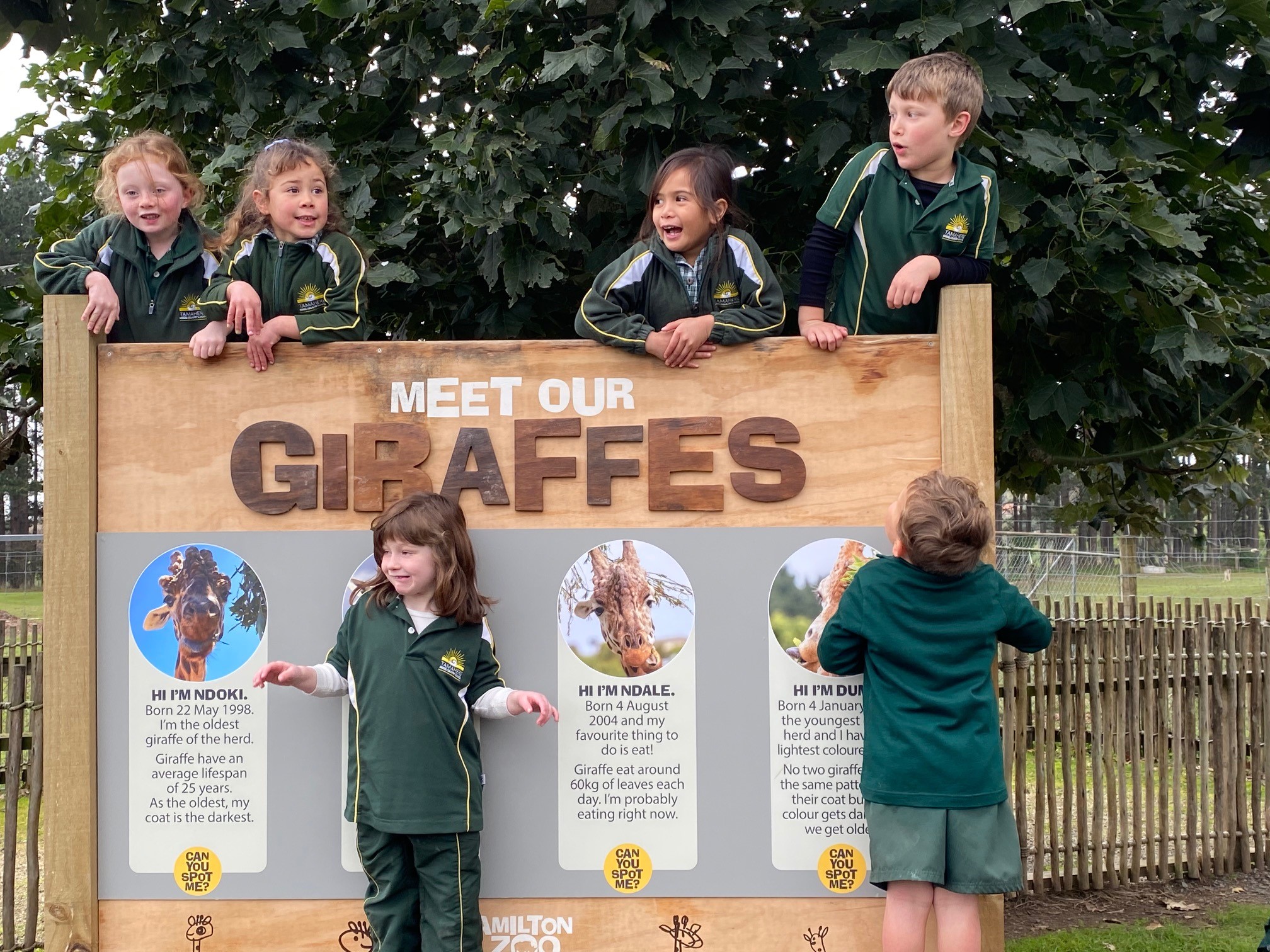 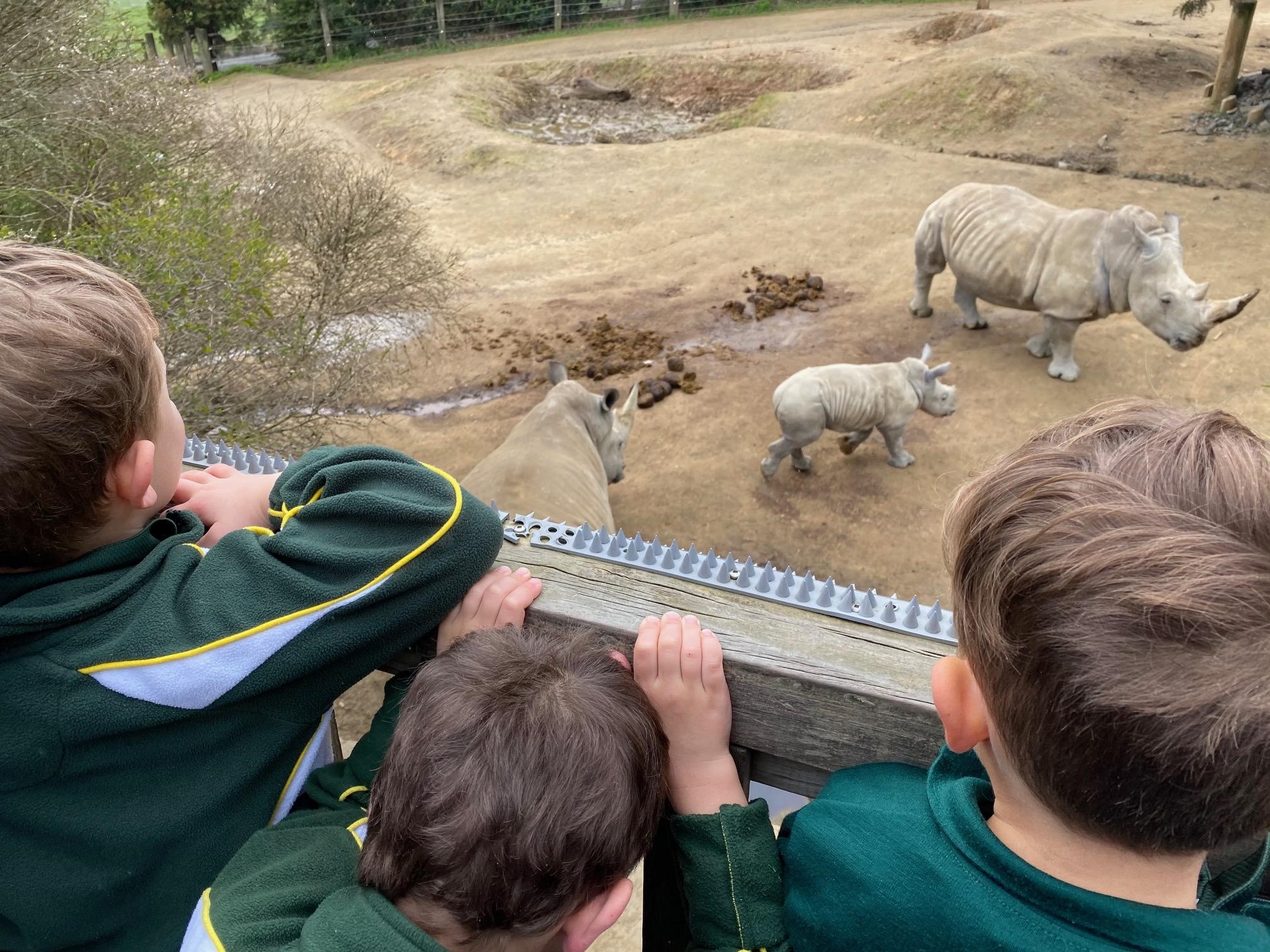 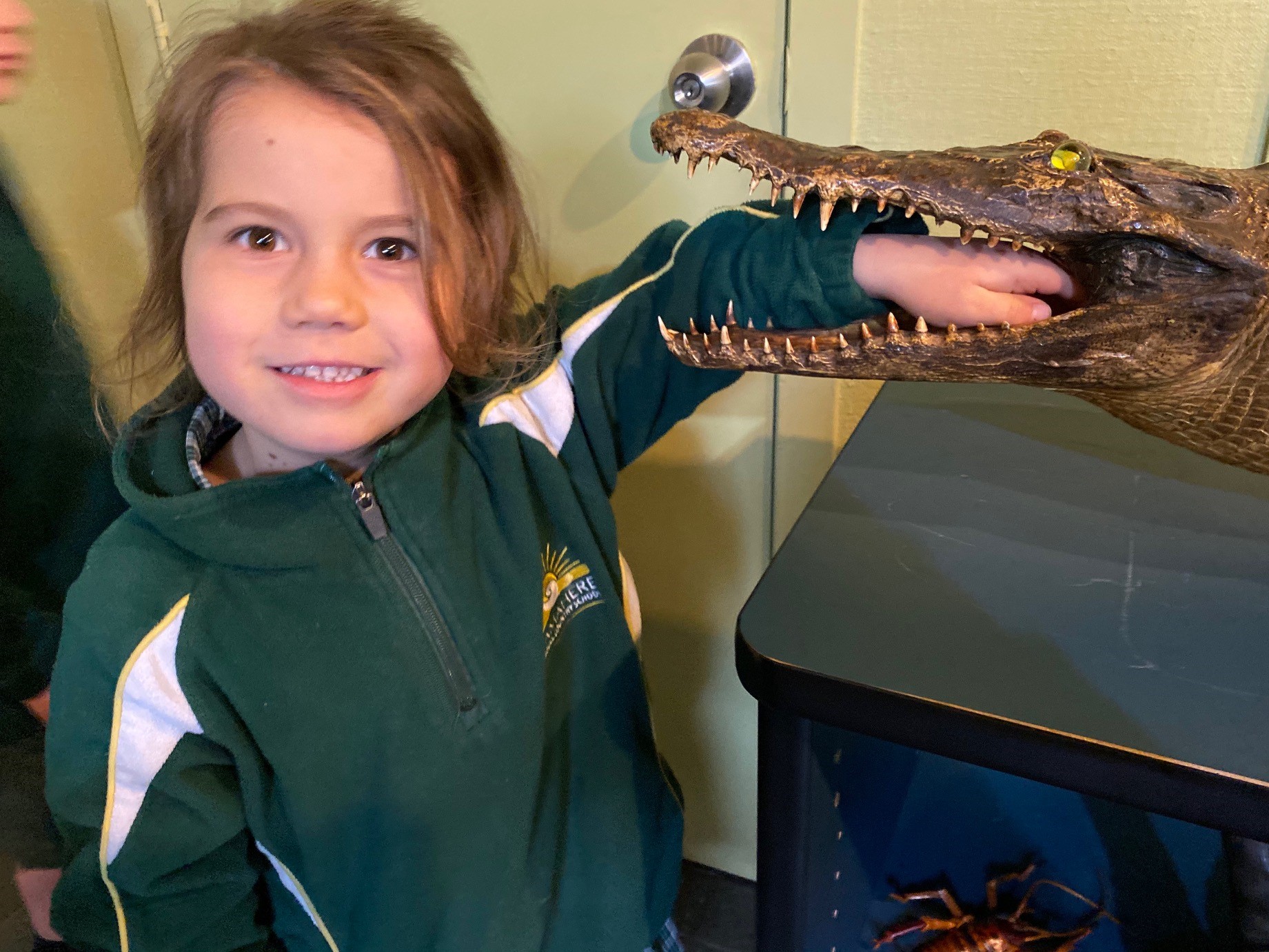 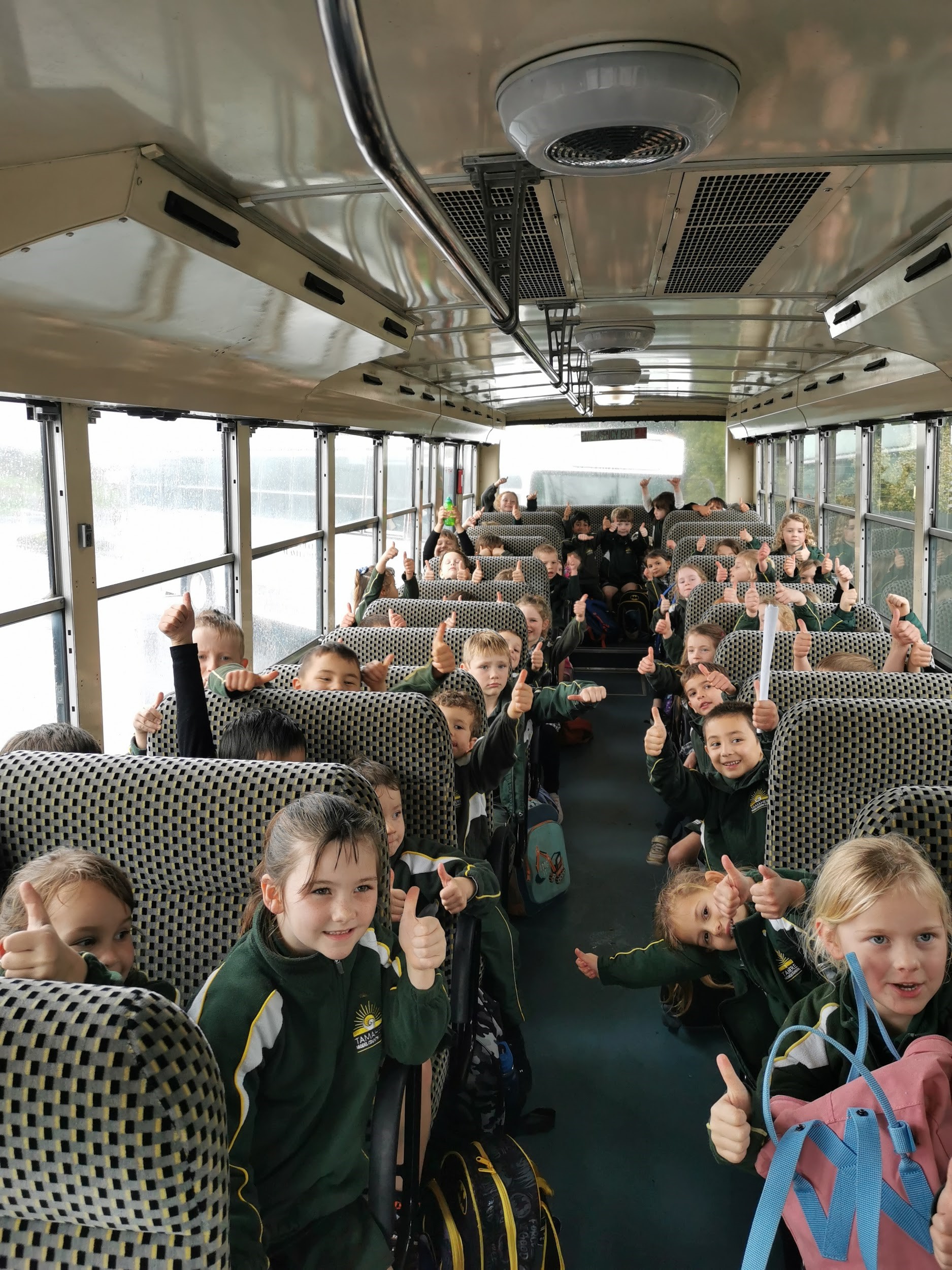 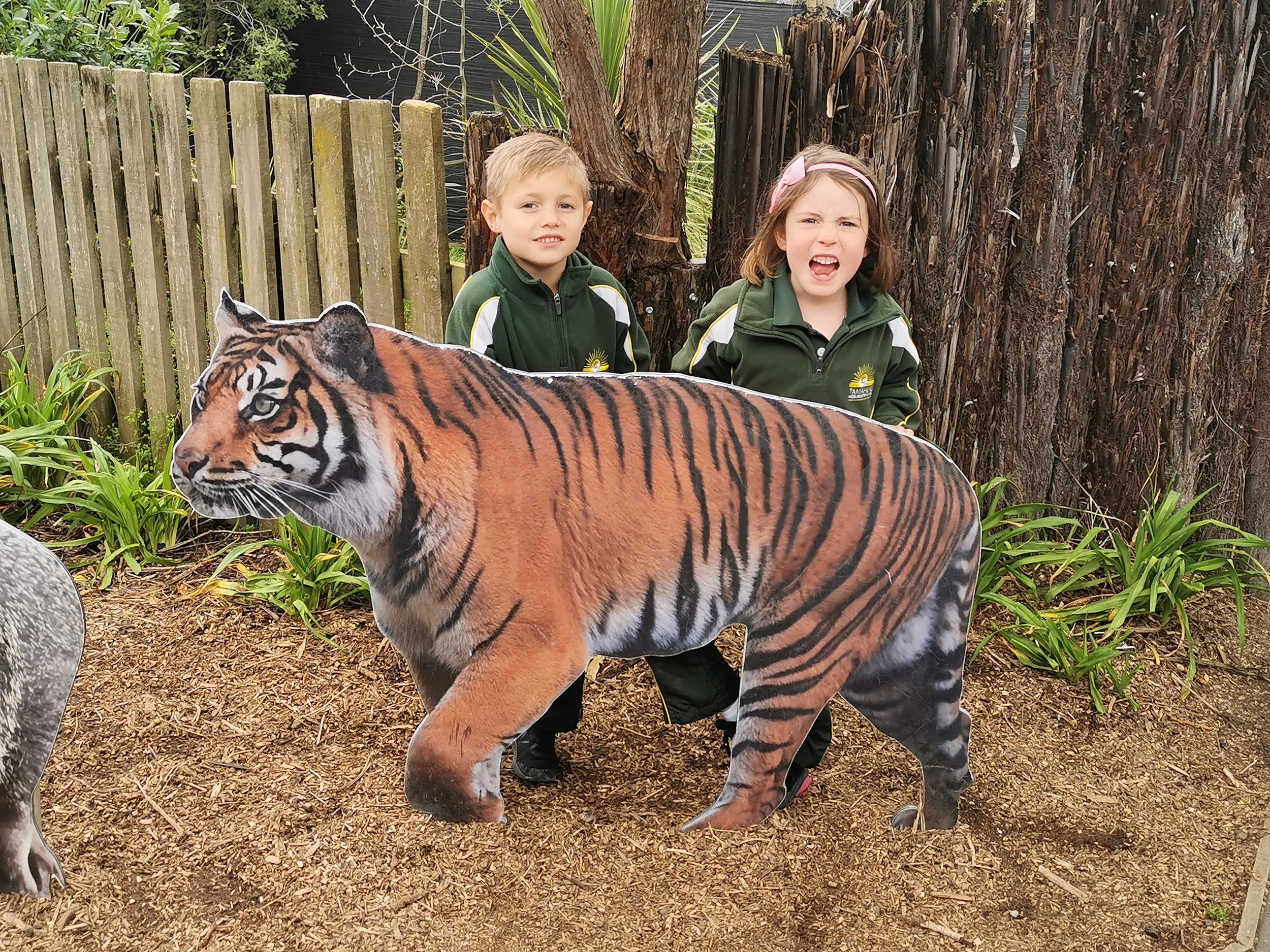 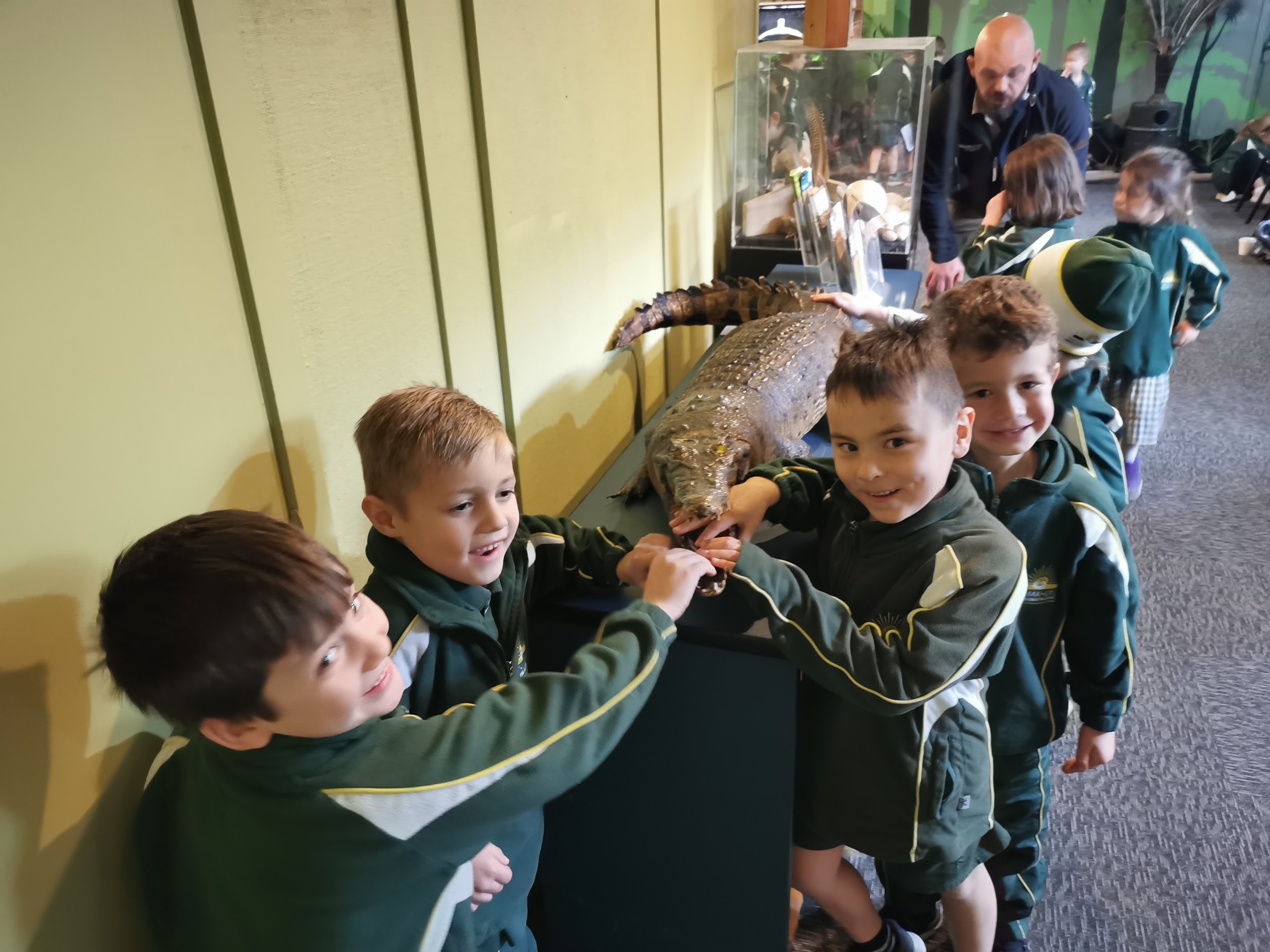 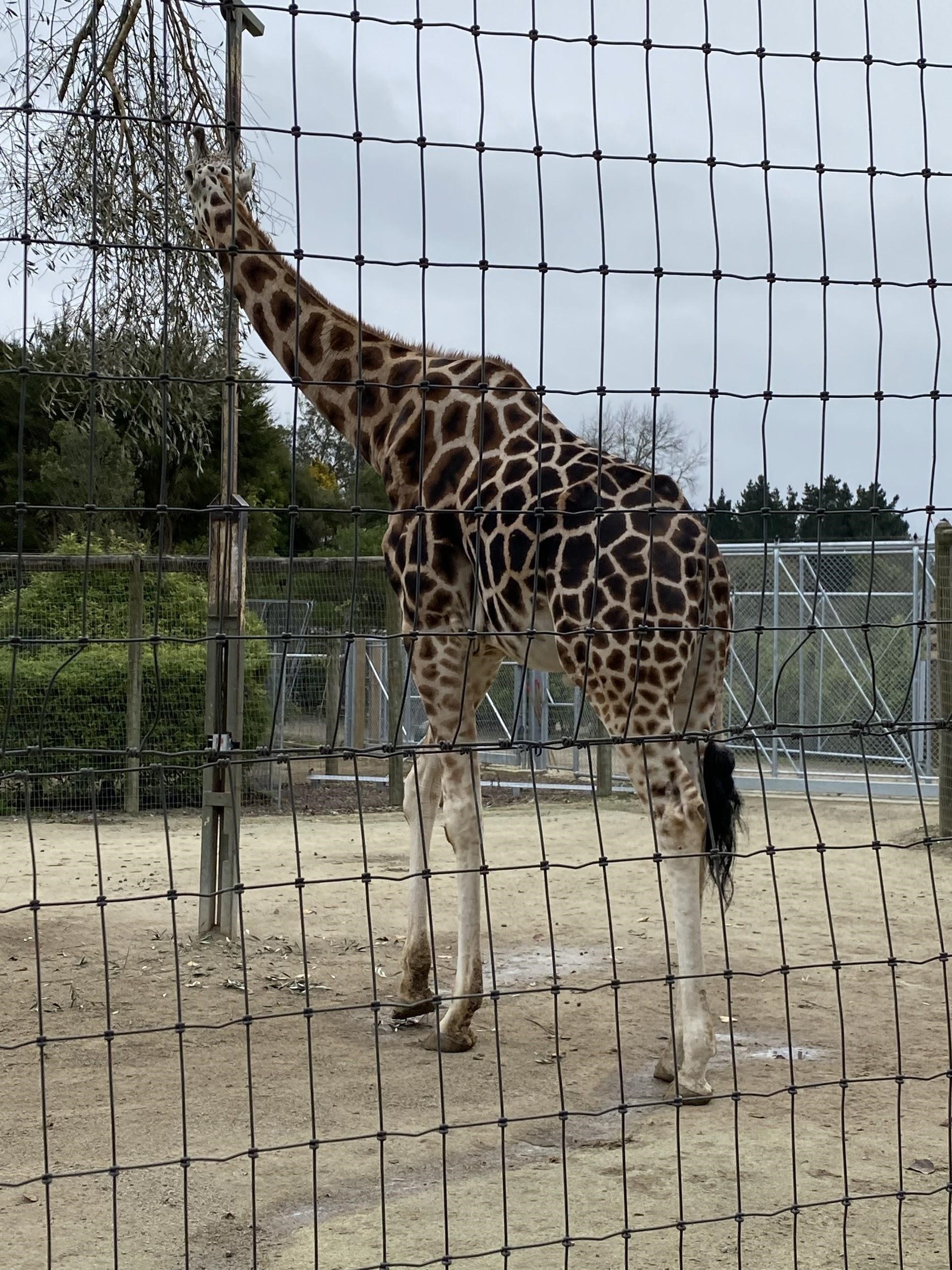 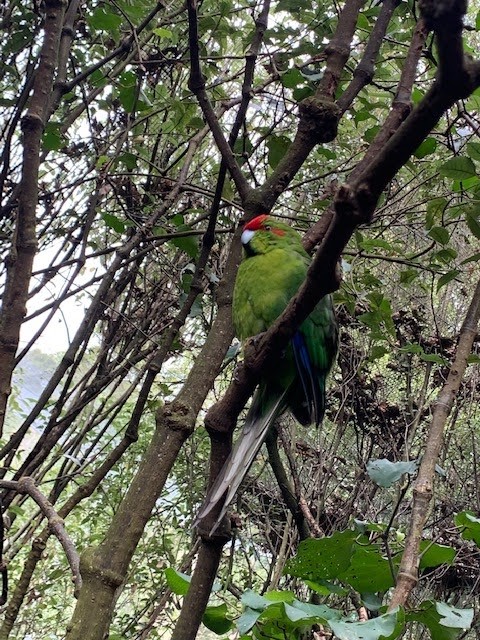 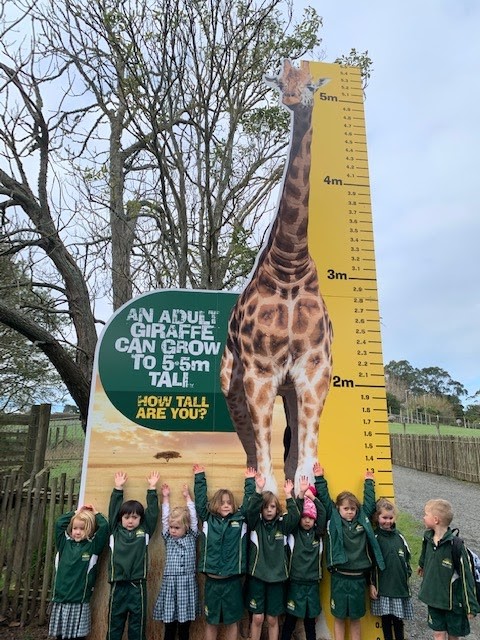 Taupiri students are busy learning, memorising and for some, dramatising their poems ready for our Week Four poetry presentations. Poems will be shared in classes on Monday, Tuesday and Wednesday afternoons during Week 4. Please refer to the presentation timetable that has been sent home by your child’s teacher.

We look forward to this opportunity, and hope you are able to join us in celebrating the students ‘can do’ attitudes.

Just a reminder that bookings for our Learning Celebrations being held next Wednesday and Thursday are open for bookings. If you haven’t already made a booking, please follow the link below:

We suggest you allow gaps between your different children’s interviews to allow time to get from room to room.

For our Harakeke 18 students, there is a Meet The Teacher evening from 5.30 to 6.00pm on Thursday 6th August, for all parents to attend.

Miss Parker is also available for meetings if you would like to pop in or make an appointment through the office. We look forward to meeting with you and your child to discuss their progress and achievements.

If you do not have access to the internet or if you require any assistance with your booking, please contact the office.

Please remember our long weekend in the middle of our term in just two weeks time. This is a reminder that our school will be closed on Friday 14th August and Monday 17th August, this is due to our staff being involved in Teacher Only Days.

As part of our professional learning and development (PLD), on Friday 14th August our teaching staff will be continuing with Mindfulness and Resilience PLD facilitated by 3 eLeader and on Monday 17th, we will be attending PLD around Linking Literacy and STEAM learning (Science/Technology/English/Arts and Mathematics) with facilitator Paula Jamieson in her Play Make and Create way of teaching.

We thank you for your support in catering for your children’s care on these days to allow us this learning opportunity. We have chosen these days, so that maybe you can enjoy a long weekend together in our beautiful Aotearoa New Zealand. These days are part of the extra Teacher Only Days allocated to all schools for the next three years as part of the Teachers Collective Agreement.

Just a reminder that we will also be having a Teacher Only Day on Monday 16th November, which will also create a long weekend in the middle of Term 4. 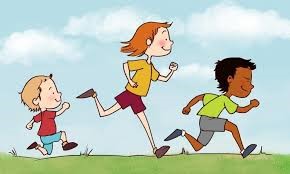 It is great to see so many of our students enrolled in the Energize Cross Country Training sessions, hosted by Cara from Sport Waikato, in preparation for our annual School Cross Country which will be held on Thursday the 13th of August.

Maungatautari and Pirongia will be holding their cross country during the morning block, with the Taupiri cross country starting after lunch at 1:15pm.

The postponement day for this cross country is Wednesday 19th of August.

Here is an outline of the days races: Races will start at approximately 10.00am, in this order:

Taupiri Races will start at approximately 1.15pm, in this order:

Children are to wear their Whanau shirts, suitable running shorts (Skorts are okay along with uniform shorts or any Tamahere sports shorts) and running shoes. Please ensure your child brings a change of warmer uniform to put on after their race, as they may get wet, muddy and cold. Please also make sure your child has plenty of food and water.

Disclosure of Risk:- Below are the possible risks your child could be exposed to on this day and the safety measures that are in place.

The Country Schools Cross Country will be held at Newstead Model Country School on Thursday the 28th August. This team will be selected from our top runners in Year 4-6.

How cool is it to wear your PJs to school? Well, you can do just that on Friday 7th August!

How lucky are we to have warm PJs to wear and warm beds to sleep in? However, there are a lot of kids out there who don’t have any warm PJs or warm bedding.

The charity Sleep Well MoePai collects sheets, duvet covers, duvet inners (to really keep warm) and PJs and hands them out to people in need.

This is where you come in. We want you to talk to your parents and caregivers and see if you can help out by donating bedding (singles are in big need!), PJs and sleepwear (slippers & dressing gowns, etc).

Starting from Monday 3rd August, you can drop off donations to the School Office or take them to our Wharemairi learning space, which is a classroom attached to the multi purpose shed, on the cricket pitch side of the shed. Please make sure everything is in good condition and washed prior to dropping it off.

On behalf of Sleep Well MoePai and all the people in need a BIG Thank you! 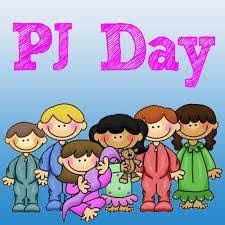 As shared in last week’s newsletter, ICAS exams are $14.50 per paper and include Science, Digital Technologies, English, Spelling and Mathematics.

The dates for the online exams are:

Forms are available in the school office or from your child’s classroom teacher and need to be returned to the office along with payment, by tomorrow, Friday 31st July.

Amy Harrop reads from her book

There’s a Hedgehog in my Pants!

Lisala reads from his picture books and leads an illustration

Storytelling in the Gallery

Traditional and contemporary stories for preschoolers 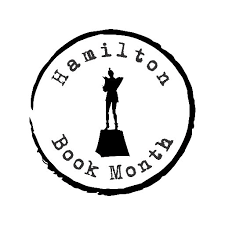 Just a reminder please, that when driving in a school zone the speed limit is 40km per hour. With the high number of people and cars at drop off and pick up time, we need everyone to ensure they are being as safe and careful as possible please.

Thank you to everyone that has already purchased an Entertainment Membership this year. We have already raised $630.00 in fundraiser commission payments. If you would like to support us with this fundraiser please visit www.entbook.co.nz/1541m73

Following James Russell’s visit last Term, Mrs Kewish has shared an exciting announcement about the upcoming release of the 5th and final book in the Dragon Defenders Book series. For more information please check out www.dragonbrothersbooks.com.

It bookends one of New Zealand’s most successful self-publishing stories, with sales of over 45,000 copies of The Dragon Defenders series in New Zealand – all run out of a garage in Mangere Bridge, Auckland.

Created by author and publisher James Russell, the junior novels have gained a loyal following with their combination of fast-paced plots and the integration of digital technology in the form of augmented reality content accessible via an app downloaded onto a tablet or phone.

Readers download the free AR Reads app on their device, point it at certain pages throughout the book and watch them come alive. Digital content is a mixture of 3D or 2D animations, videos, audio files and code-cracking animations.

“The augmented reality content in the books has proven to be a big draw for children – and particularly for those who might be a bit reluctant – but not at the expense of good old-fashioned reading,” says Russell. “It’s not a game, but rather another element, or a complement to the story.”

Examples might include a code being revealed before the reader’s eyes via the app, or a video rant from the book’s bad guy – The Pitbull – featuring Russell himself. “I needed someone scary looking, reliable and inexpensive,” he says.

The Dragon Defenders series is one of just a handful of books worldwide using this technology.

The books are the highest-ranked junior novel series by a Kiwi author on the current Whitcoulls Kids Top 50 list, voted for by over 15,000 New Zealanders each year.

“The books’ success has blown me away,” says Russell, “especially as, being an indie publisher, I have very little budget to work with. Essentially their success is down to word-of-mouth.”

The first book in The Dragon Defenders series has been published in the Czech Republic, and the entire series is set to be published in Turkey this year. 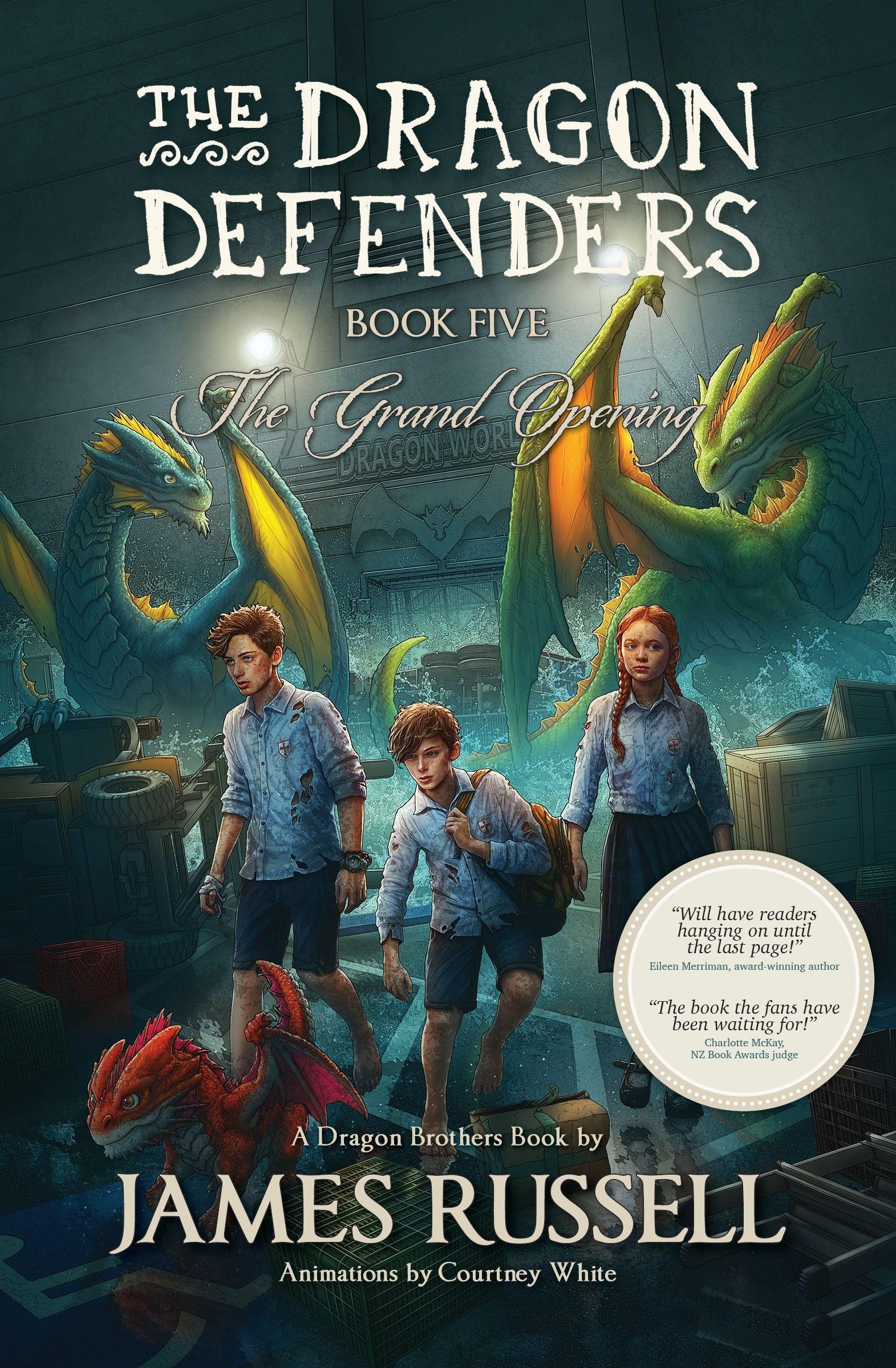 An evening structured for prospective parents and students to be informed about the extensive range of programmes on offer at Berkley.

Please note: Out of Zone Enrolments are welcomed and must be with the school office by Wednesday 26 August 2020. Contact school office: 856 6537 or www.berkley.school.nz